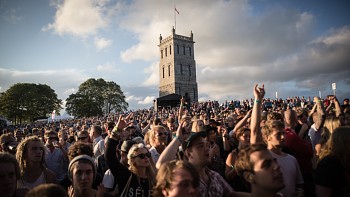 “I had traveled first by ship across four countries, then plane, then shuttle, then train, then taxi, then bus to get to the 2014 Slotsfjell Festival in Tonsburg, Norway”

Lauren Hartig, Director of the Field Office at Semester at Sea, gives readers of The PIE Blog a taste of what staff and students experience on a voyage in a three-part blog series. Here she shares the second instalment of her travel adventures as she spends the summer on the high seas. When you are traveling and working on a ship voyaging across Europe, each port can seem like an entire lifetime – in the best possible way. As the Director of the Field Office for the Semester at Sea summer 2014 voyage, my work days while we are at sea are long and laborious, but always rewarding. Then we get to spend four to five days in each port and when I get the chance to indulge my passion for music and meeting new people in new places I always take it. This is how I found myself among the beautiful hordes of Norwegians dancing to one of my favorite Swedish bands, Lykke Li.

I had traveled first by ship across four countries, then plane, then shuttle, then train, then taxi, then bus to get to the 2014 Slotsfjell Festival in Tonsburg, Norway. In our pre-port logistical mandatory meeting for the entire shipboard community we learned that Norway was utterly stunning and can also be extremely expensive. We were told that the people were friendly, but not overly so by American standards. I packed for my overnight with snacks in my bags and old fashioned paper copy travel books.

Fast forward eight hours and I am dancing atop a beautiful rock on the festival grounds (which also housed a former Viking fortress) with an equally incredible night of endless daylight backdrop and I thought to myself “this was worth every kroner to get here”.

With a sun drenched sky on the second day, reminiscent of my San Diego hometown, I embarked on the full repertoire of festival fun. Within mere minutes of entering the festival grounds, I was adopted by a twosome of smart and spunky Norwegian girls. They were here to have a good time and as soon as they heard my story, they wanted to make sure I did as well. I was also clearly the only US citizen there and quite the anomaly.

We embarked on adventures that ranged from “American” dancing lessons, me giving yoga lessons on top of picnic tables, and introductions all around to all kinds of people and more musical variety than I have seen in a while. For them, the festival was about getting to hang out with their main group of friends, some leaving for home up north directly after and others traveling for University or out of Norway. For me, attending music festivals was mainly about the music, but in recent years it has also become about new experiences and people and locations, especially in international destinations.

On my travels I had incredible help from and discussions with everyone from the train operator, the girl at reception at my hostel, and the young girls working the festival on the ½ hour bus ride back to my hostel. I will and would highly recommend any kind of festivals in a new country to any and all of my friends. Festivals in some form have been around for centuries as people gather together to celebrate with food, music, and dance.  The way we choose to travel in and around the world (like the way we approach our time in port), can lead to a different approach to “travel”, travel for more than pleasure, but travel to connect to different kinds of people in different parts of the world. So how do you travel?

Lauren Jane Hartig is an international educator who has traveled to over 42 different countries and is always looking for the next adventure! She is currently on leave from University of California, San Diego and is serving as the Director of the Field Office for the Semester at Sea Summer 2014 voyage. Read the first instalment of her travel blog here.